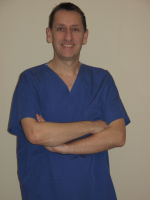 Mr David Johnson MA (Cantab) BM BCh (Oxon) DM (Oxon) FRCS (Plast) is a Consultant Plastic, Reconstructive and Craniofacial Surgeon in the John Radcliffe Hospital in Oxford.
He graduated from St Catharine's College, Cambridge University with a First Class Honours degree in Medical Sciences in 1989 and graduated from Christ Church, Oxford University in Clinical Medicine in 1992. After completing his general surgical training he became a Fellow of the Royal College of Surgeons of England in 1996. He then undertook three years of full time research as a Wellcome Clinical Training Fellow at the Weatherall Institute of Molecular Medicine in Oxford, where he researched into the molecular biology of craniosynostosis and the genetics of congenital hand anomalies. He obtained a Doctor of Medicine Degree from Oxford University in 2001 and was awarded a Hunterian Professorship as recognition of his research by The Royal College of Surgeons of England. He has published extensively in the medical and scientific literature and has presented his original and innovative work at a host of national and international meetings. He continues his research interests in craniofacial conditions and in addition is one of the lead editors of the 39th edition of Gray's Anatomy which was published in 2004. He continues to be an editor for the forthcoming 40th edition.
He trained in Plastic Surgery at Mount Vernon Hospital in London, Salisbury District Hospital and the Radcliffe Infirmary in Oxford. He then spent one year as a Senior Craniofacial Fellow at The Australian Craniofacial Unit in Adelaide before taking up his Consultant Post in Plastic, Reconstructive and Craniofacial Surgery in the Oxford Radcliffe NHS Trust in 2006.
Mr Johnson is fully registered with the GMC and has been on the Specialist Register since 2005.