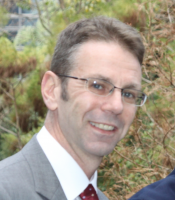 Having qualified in 1984 and completing his pre-registration training in the Republic of South Africa, Mr. Tyrrell immigrated to the UK in 1986. He trained in general surgery with a special interest in Vascular Surgery in London and the hospitals of the South East. This included a PhD and DIC obtained during a period of full-time research at St. Mary's/Imperial College.

He took up his first consultant appointment as a vascular & general surgeon in Royal Tunbridge Wells in April 1996, where he established and ran a successful single-handed specialist vascular unit offering the full range of open arterial and venous surgery in the setting of a district general hospital.

Regional NHS reorganisation resulted in re employment in the King's College Hospital vascular unit in August 2006, where he ultimately became clinical lead for vascular surgery and developed the aortic endovascular program. International collaboration aided the rapid evolution of this program to include the most modern complex endovascular aortic procedures.

Mr. Tyrrell saw an opportunity for the furtherment of vascular services in South East London by the merger of the departments of King's and St. Thomas'. This received initial enthusiastic support in both Trusts and he chaired the relevant business case committee and oversaw the initial stages of the merger, effectively transferring his in-patient activity from King's to St. Thomas' in July 2012.

At present, he provides out-patient (including vascular lab) and day-surgery services on an out-reach basis in Tunbridge Wells and in patient services (for patients from Tunbridge Wells as well as the local catchment area) at St. Thomas'.

Mr. Tyrrell's areas of special interest are the aorta (conventional open and simple/complex endovascular) and carotid surgery, as well as a significant commitment to superficial (conventional and endovenous) venous surgery. Over the years he has published in the national and international press on most vascular surgical topics and maintains a significant post-graduate teaching commitment, particularly relating to open and endovascular aortic surgery.

He does have a wide range of (mostly dangerous) hobbies and interests outside of medicine.