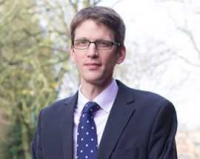 Michael Parry undertook his undergraduate medical training at the University of Bristol qualifying in 2001, having completed an intercalated BSc in anatomy on the way.

Mr Parry started his surgical training in Oxford and the South East before returning to Bristol to complete his higher surgical training. He was awarded a Doctorate in Medicine in 2012 for his research into the effects of debris released by hip replacements, and was previously appointed as an NIHR clinical lecturer in orthopaedic surgery at the University of Bristol.

He completed fellowship training in lower limb arthroplasty at the University of British Columbia, Vancouver and orthopaedic oncology at the internationally renowned Royal Orthopaedic Hospital Oncology Service in Birmingham.

Michael was appointed a consultant orthopaedic surgeon at the Royal Orthopaedic Hospital in 2014 and is an Honorary Senior Lecturer at the University of Aston.

I am more than happy to make myself available to give talks to health care professionals and teams in any of my areas of interest.