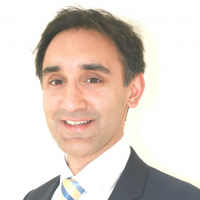 He also specialises in the management of complex fractures. He works as a high volume surgeon at St Mary's Major Trauma Centre.

He has an interest in sports hip surgery and young adult hip problems and offers a comprehensive service for problems around the hip including arthroscopy(keyhole surgery), hip replacement, hamstrings repair, pelvic instability surgery, sacroiliac/pelvic fusion and hip resurfacing. He works closely with a team of physiotherapists to diagnose and treat most hip problems without the need for surgery.

His NHS practice is based at Charing Cross and St Mary's Hospital where he is a high volume surgeon for pelvic and acetabular/complex hip injuries. As a regional specialist he accepts referrals of complex cases from other consultants.

He is widely published and his research interests are focused around better hip replacement techniques, outcomes following surgery, the use of 3D printing technology in surgery and improving pelvic trauma care

As an Honorary Senior Clinical Lecturer at Imperial College, Mr Daurka is actively involved in training surgeons of all grades from medical students at Imperial College to International Lectures in venues such as the Royal Society of Medicine. He is invited regularly to deliver lectures internationally on topics including hip replacements following acetabular fractures and improving outcomes in patients with life threatening pelvic injuries.

Mr Daurka works closely with organisations such as the AO Foundation, the largest international surgical training organisation. As a member of the Pelvic and Acetabular Task Force he has helped design the current AO Pelvic course.