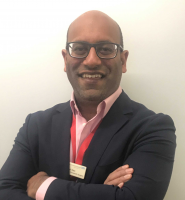 Mr Hersh Deo is a Consultant Orthopaedic surgeon specialising in knee and hip surgery. His NHS practice is based at The James Paget University Hospital NHS Foundation Trust which covers Norwich, Great Yarmouth and Waveney as well as parts of Suffolk and Norfolk. Privately, he works at East point Consulting Rooms (epcr@jpaget.nhs.uk) and The Spire Norwich (www.spirehealthcare.com/norwich).

His special interest is young adult knee problems and treatment of sports injuries of the knee such as ACL (anterior cruciate ligament) rupture, meniscal tears and cartilage damage. He also specialises in total and partial knee replacements and total hip replacements.

Mr Deo gained his medical degree from St George's Hospital Medical School (University of London). After completing 3 years of Basic surgical training, he took a year out to study for a Master of Science degree in Surgical Sciences at the prestigious Imperial College, London. His research looked into ways of regenerating articular cartilage in the knee – an area which remains of special interest today. His Orthopaedic higher surgical training took place in London (South-East Thames rotation 2002-2008) after which he completed 2 years of Fellowship training, sub-specialising in surgery of the knee and hip. His first Fellowship was spent in Adelaide, where he worked closely with some of the best surgeons in Australia perfecting techniques in sports injury surgery. The second year was spent as a Fellow at Guy’s & St. Thomas’ Hospital in central London where he learned techniques in hip arthroscopy and all aspects of hip and knee replacement including revision surgery.

For joint replacements, Mr Deo is committed to using evidence based implants and advanced bearing surfaces (Verilast). Hersh prides himself on offering state-of-the art, evidence based operative techniques. Through implementation of personal innovations and effective communication within the multi-disciplinary team, his joint replacement patients have a shorter length of stay, re-admission rate and infection rate compared to the national average (Dr Foster).

The Knee
JBJS
Journal of Arthroplasty