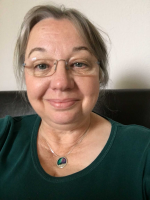 I began working as a clinical psychologist in the N.H.S. in 1981. Since this time I continued to work in the N.H.S. in a variety of mental health settings in England and Scotland. I retired from the service in 2016. Since 1989 I have had my own private practice initially in London and, since 1996, in Edinburgh. I qualified as a psychoanalytic psychotherapist with the British Association of Psychotherapy in 1993. Since 1997 I was involved in setting up IPT training in the U.K. and was Chair of IPT Scotland 2008-2014. I have also worked as an academic in Clinical Psychology and trained clinical psychologists in London and Edinburgh as well as working as a researcher for the Medical Research Council Child Psychiatry Unit at the Insitute of Psychiatry in London 1984 to 1994.