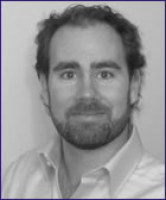 Born and raised in Dublin, Alan moved to Edinburgh in 2002 after obtaining his chiropractic qualifications from the Welsh Institute of Chiropractic at the University of Glamorgan.

Initially, Alan worked for Leah Healthcare Services at their Dundas Street and Comiston Road chiropractic clinics. After 3 years at the latter, he decided to take up the opportunity and challenges of practicing independently. Albion Healthcare was incorporated to takeover that Leah Clinic, and Morningside Chiropractic Clinic was formed as a result.

He has practiced in Morningside ever since and has thoroughly enjoyed becoming part of the neighbourhood; getting to know many of its residents, shopkeepers and characters alike. Alan’s first introduction to chiropractic was when he witnessed the positive effect that it had on his father’s back pain, helping him to avoid a scheduled surgery. He has since continued to see the many benefits that chiropractic can offer, both as patient and practitioner. Alan is the only Bupa registered chiropractor in the clinic.

He has a keen interest in rugby (especially if Leinster or Ireland are involved), cricket and golf and continues to play hockey in the local leagues.