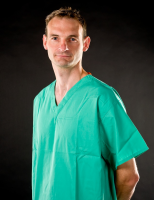 
As a Consultant HPB Surgeon, Mr Brooks undertakes gallbladder surgery for symptomatic gallstones, as well as liver and pancreas surgery for cancer. He also specialises in laparoscopic hernia surgery.

Adam has extensive surgical education experience. He developed the Specialist Skills Course in Emergency Surgery & Trauma for Surgical Trainees held at the Royal College of Surgeons of England and has taught trauma surgical skills around the world including the USA, Australia, Norway and New Zealand in additon to the Definitive Surgical Trauma Skills Course in the UK.

Adam has published extensively having edited 10 textbooks including Ryan’s Ballistic Trauma (Springer Verlag) and Emergency Surgery (Blackwell) and and written more than 100 chapters and peer reviewed academic papers. During his training and Consultancy Adam has held a number of academic postions at institutions including the University of Nottingham, University of Pennsylvania, University of Witwatersrand and the Royal Centre for Defence Medicicnie where he was Honorary Senior Lecturer in Military Surgery and Trauma. Adam has served in the UK reserve forces since 1998 and has deployed widely as a Consultant Trauma Surgeon with the UK Military in active combat zones.

Adam has significant experience in Clinical Leadership and Healthcare Management and gained an MBA from the University of Nottingham in 2014. He has worked in leadership roles in Acute Trust, Primary Care Trust and Strategic Health Authority level. Adam served as Director of Surgery at Nottingham University Hospitals NHS Trust fin 2016/17, responsible for 23 surgical specialities and an annual turn over of £250million. Nationally, Adam chaired the NHS England Major Trauma Clinical Reference Group for 3 years and is currently the Midlands and East representative. He sat on the Major Trauma Department of Health Clinical Advisory Group and was part of the Independent Trauma Network Designation Evaluation Panel for Healthcare for London. He has also undertaken independent Healthcare Consultancy in Major Trauma.

Adam has been the Director of the East Midlands Major Trauma Centre based at Queen’s Medical Centre, Nottingham since its opening in 2012. The EMMTC is the largest major trauma centre in the UK, managing 2000 major trauma patients a year and has a National reputation for the excellent care that it delivers.

I have given talks on hernias, gallstones and gallbladder surgery, benign and malignant liver and pancreas disease.