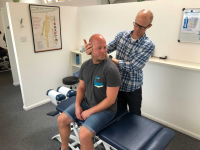 I became a chiropractor originally because I liked the simplicity behind the concept of using the spine to improve someones health – without the need for drugs or surgery. I practice this principle and love to promote ‘the healthy spine, healthy you’ concept.

I graduated from the Royal Melbourne Institute of Technology (R.M.I.T) Australia in 1994 and took over Putney Chiropractic Centre (est. 1986) in 2002.

I had the pleasure of working with Sophie Hosking, (the Gold Medalist in the lightweight women’s double scull) in the lead up to London 2012. I was the chiropractor for the GB canoeing team and had the pleasure of working with Tim Brabants, the 2008 Olympic gold medalist in the K1 1000m and a finalist in London 2012. I’m experienced in skiing biomechanics and I am part of the Biomechanics and Physiology team for the Warren Smith Ski Academy, alongside my role as health and fitness editor for Ski and Board magazine. You can find me in the ‘ask the expert’ section of the Ski Club of Great Britain’s website.

I am a cycling nut who rides for the amateur road and velodrome racing team Nuun Sigma Sport London.