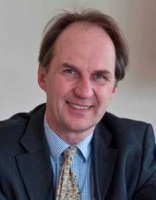 Mr Clemens von Widekind, Consultant Obstetrician and Gynaecologist at Northampton General Hospital and BMI Three Shires Hospital. As a specialist in minimal invasive surgery and in ultrasound Mr von Widekind deals with complications in pregnancy and all gynaecological conditions.

Mr von Widekind’s work is divided between his NHS practice at Northampton General Hospital and private practice at The Three Shires Hospital Northampton. His special interest is in ultrasound imaging and minimal invasive surgery, in both specialist areas he has more than 20 years of experience.

He was appointed Clinical Director of the Department for Obstetrics & Gynaecology at Northampton General Hospital in 2009-14. He was promoted Divisional Director for Women's, Paediatrics and Oncology 2015 -17.

He has been at Northampton General Hospital since 2001 after having worked previously in Teaching Hospitals in Cologne and Berlin. He is a member of the British Society for Gynaecological Endoscopy (BSGE) and lead clinician for endometriosis at Northampton General Hospital. Member of the Royal College of Obstetricians & Gynaecologists and the Oxford Medico-Legal Society. He teaches Junior doctors and medical students from Oxford and Leicester University.

Mr. von Widekind is an advanced laparoscopic surgeon he
• has been involved in pioneering laparoscopic surgery since 1988.
• is lead surgeon for severe endometriosis.
• introduced LaSH Hysterectomy in the East Midlands in 2007.

One of the greatest trends in the history of surgery is the advent of minimally invasive techniques for the full spectrum of surgery types performed on the human body. Minimally invasive means performing surgery in many cases without open incisions. For patients, this can translate into a lower risk of infection, faster recovery and less scarring. Because of the great benefits offered by such techniques, minimally invasive options challenge the standard-of-care for many conditions and should always be considered for

In general, Gynaecologists use laparoscopy as a diagnostic tool and to support minor procedures such as biopsy or draining of a cyst and to assist basic steps of a vaginal hysterectomy (LAVH).

In contrast, Advanced Laparoscopic Surgeons have extensive experience in using minimal invasive techniques and do not resort to open surgery. They can manipulate organs safely and with numerous strategies can handle technically difficult situations, thus avoiding open surgery. They can operate on patients with previous surgery, know how to apply bloodless preparation techniques and they can suture intra-abdominally e.g. insert and attach meshes and can remove a large organ through a small hole.

Member of the Royal College of Obstetricians & Gynaecologists.
Member of the British Maternal & Fetal Medicine Society.