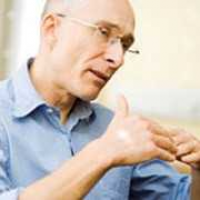 Professor Martin Birchall is one of the leading academic otolaryngologists in the world as measured by the impact of his research and papers. He has a particular interest in voice (especially vocal cord paralysis or palsy), swallowing (especially pharyngeal pouches), airway disorders such as stenosis, chronic cough and neck lumps. He is part of multidisciplinary voice and airway teams and established with laryngology, respiratory, thoracic surgery, anaesthetic and other colleagues a national referral team for complex airway disorders. Professor Birchall works closely with highly specialised, leading voice and swallowing therapists to obtain the best possible patient outcomes.

He treats patients with vocal cord weakness (‘palsy’), and is trialling a new means of restoring function for them using the drive from unaffected nerves. In a monthly intervention clinic, run with top speech and language therapists, Professor Birchall uses the latest technology, such as transnasal oesophagoscopy and transcutaneous vocal cord injection, to treat voice and swallowing problems. he has a large research group concentrating on the use of innovative technology to manage disorders of the airways, especially the use of tissue engineering, stem cells and robotics.

In 2010 he was also part of the team which performed the world’s second (and first functionally reinnervated) laryngeal transplant at UC Davis, California. He was Morgan Stanley Briton of the Year (Science and Technology), 2008, and is a frequent guest speaker at major international conferences.

He is President and Co-Founder of the British Laryngological Association, one of the most progressive and patient-engaged professional societies in Otolaryngology. He developed quality standards and audit for the process of head and neck cancer care in the UK.

Professor Birchall is also a highly experienced Expert Witness in medicolegal matters pertaining to his areas of interest.

He is also a sought-after advisor to industry, research councils and government on regenerative medicine and advanced surgical technology.

Outside work, Martin loves spending time with his five children, as well as cinema and road cycling.

Martin Birchall is a surgeon researcher at University College London and associated hospitals. He has pulled together multidisciplinary teams of scientists, engineers and clinicians to develop innovative solutions to loss of upper aerodigestive tract function, including problems with breathing, swallowing and voice. The work of these teams has delivered advances in laryngeal transplantation, organ tissue engineering and the application of soft robotics to lost motor function.

He is an NIHR Senior Investigator and Director of the NIHR Advanced Surgical Technologies Incubator, as well as the EPSRC Soft Robotics Platform. He was the first ENT surgeon to be elected to the Academy of Medical Sciences, and was voted Briton of the Year for Science and Technology in 2008.

I have published on the effects of reflux on the throat, as well as on many aspects of head and neck disease. In clinic, I use the latest in imaging technology to view the throat of patients with voice, swallowing and breathing problems. I also see patients with chronic cough and am an expert in treating pharyngeal pouches, with 75% of my practice being patients referred from other consultants due to the difficult nature of their problems.