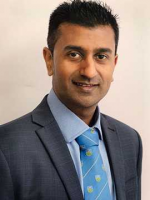 Mr Sunil Panchani is a Consultant Trauma and Orthopaedic Lower Limb Surgeon who is primarily based at the world renowned Wrightington, Wigan and Leigh NHS Foundation Trust. He has specialist experience in Complex Primary and Revision Hip and Knee joint replacements and Pelvic and Acetabular trauma.

Mr Panchani graduated from the University of Liverpool in 2004 with an Honours degree in Medicine. He underwent basic surgical training in Merseyside and completed his higher surgical training within the North West of England. Mr Panchani completed his Master’s degree in Orthopaedic Engineering at Cardiff University in 2010 where he gained valuable insight into the biomechanics of joint replacements. He gained his Fellowship of the Royal College of Surgeons in 2013 and joined the Specialist Register in 2016.

Mr Panchani underwent specialist fellowship training in Pelvic and Acetabular surgery at Wrightington Hospital within the Northwest Pelvic Unit. He was awarded the prestigious Cavendish Fellowship thereafter, based in Sheffield Teaching Hospitals, where he completed further training in the management of complex revision surgery for failed or infected joint replacements under the guidance of internationally renowned Orthopaedic surgeons. He has visited many Orthopaedic centres within the UK and Europe to enhance his experience in complex lower limb surgery.

Mr Panchani joined the staff at Wrightington, Wigan and Leigh NHS Foundation Trust’s Orthopaedic department as a substantive consultant in May 2017. He also holds an Honorary contract for Pelvic and Acetabular trauma surgery at Lancashire Teaching Hospitals NHS Foundation Trust.
He began working in Private Practice in April 2019 where he undertakes clinical sessions at Renacres Hospital in Southport, and the John Charnley Wing in Wrightington Hospital.

Mr Panchani has a keen interest in research and has published multiple articles in peer reviewed journals and has also presented his work at international meetings. He has experience in setting up and completing clinical trials to further the knowledge base within orthopaedic surgery.
He maintains a keen interest in teaching and developing the skills of UK and international junior doctors, as well as allied professional staff and students. He has been a faculty member in a number of orthopaedic courses which he has helped to organise.

Mr Panchani maintains a medico-legal practice completing a number of reports annually and has completed an accredited Bond Solon course in this area of practice.

Mr Panchani has gained a wealth of experience during his training and consultant career thus far and by providing patient focused care and using evidence-based medicine he strives to ensure optimal outcomes for his patients.