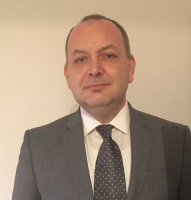 Mr Karamanakos graduated with honours from the Semmelweis University of Medicine in Budapest, Hungary. He undertook his surgical training in the UK and Greece. In 2009 he completed his surgical training and gained his CCT in General Surgery from the University Hospital of Patras, Greece. Following that he was appointed as Consultant Surgeon in the department of General Surgery in Patras where he was mostly involved with the management of morbidly obese patients with bariatric surgery. He later completed fellowships in gastrointestinal surgery at Whipps Cross Hospital and Kings College Hospital in London. He has attended advanced laparoscopic surgery courses at the world-renowned centre IRCAD/EITS in Strasbourg, France.
Mr Karamanakos has been awarded a PhD with honours for his work in bariatric surgery and gastrointestinal hormones. His research has been published extensively in renowned medical journals like 'The Annals of Surgery' and he have published dozens of articles in peer-reviewed international medical journals. He is an active Editorial Board Member of many surgical journals, has been an invited speaker in many international surgical and medical meetings and congresses and has received multiple awards and distinctions for his academic work.
Mr Karamanakos is currently working at the Basildon and Thurrock University Hospital as a General and Upper Gastrointestinal Surgeon. Being the only Upper GI surgeon in the department he deals with a big volume of benign Upper GI pathologies including Gallstone disease and Anti-reflux surgery. He is also leading the emergency service and he has developed many clinical pathways as well as a Surgical Ambulatory Unit which has contribute significantly in the improvement of the service.

The majority of his operations are performed laparoscopically (Keyhole).

I have particular interest in Bariatric/ Metabolic surgery including gastrointestinal hormones.

Managemet of Gallstone disease (including cholelithiasis, choledocholithiasis and gallstone pancreatitis)