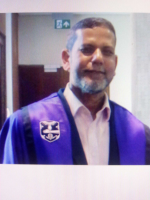 Dr Amin Islam qualified as a doctor at Chittagong University, in 1997. His general medical training was in the St Bartholomew's and the Royal London Hospitals in London. He obtained his membership of the Royal Colleges of Physicians of the United Kingdom (MRCP UK) in 2004.
After his general medical training he worked in emergency and acute medicine at the Royal London hospital and Homerton University Hospital NHS Foundation Trust in London.
In 2007 Dr Islam moved to world’s first cancer hospital, The Royal Marsden Hospital HNS Foundation Trust, as specialty Registrar in haematology where he gained extensive experience looking after patients with wide range of haematological (Blood) malignancy and stem cell transplantations.
In 2008, Dr Islam went to Addenbrooke's, Cambridge University Hospital NHS Foundation Trust for a year to gain further experience in haematology and stem cell transplantations and paediatric haematology including stem cell transplantations in children’s.

He then finally moved back to Bart’s health NHS trust to complete his training where he gained further experiences in malignant and non-malignant haematology.
He obtained his Fellowship of the Royal Colleges of Pathologist of the UK (FRCPath UK) in 2013, completed his training and obtained CCT in haematology.
He has taken the consultant haematologist post in Southend University Hospitals NHS foundation Trust in June 20014.

Dr Islam has special interest in research. He actively participates in various national and international clinical trials and he is an investigator for haematology Trials at Southend University Hospital. Here he is also the cancer lead for teenager and young adults.
Dr Islam is also working as hospital transfusion committee chairman.
He enjoys teaching junior doctors and regularly delivers lectures to junior doctors and general practitioners (GPs).

He has taken the challenge to get Southend hospital haematology to level 2B services within Essex Success Regime and making it a centre of clinical excellence.
He is actively involved in various local patients support groups.

Dr Amin Islam has a passion in philanthropy and since his graduation he has been dedicated to help people with disabilities and has been conducting screening people in rural Bangladesh helping them to have life changing corrective surgeries and medical treatments via his organization called Janaan health. (www.janaanhealth.org)

So far Dr Islam has conducted several of these screening programmes through his organization and has seen more than 15000 patients, helped more than 300 corrective surgeries in both adults and children’s.
He enjoys gardening, cooking Indians and travelling to gain experiences from different cultures.