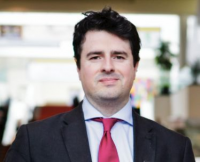 He is a focused ultrasound specialist for patients with tremor. He is also neurosurgeon to the UCLH Adult Craniofacial multidisciplinary service treating head shape deformity, temporal hollowing, adult craniosynostosis and head contour repair after neurosurgery.

* Tumours such as meningioma

* Treatment of spinal stenosis and disc prolapse within the neck and lower spine, back pain and sciatica

He is an invited specialist advisor to NICE on behalf of the British Society for Stereotactic & Functional Neurosurgery, providing expert guidance on treatments across the country for conditions such as headache, facial pain, movement disorders, and spinal pain.

Mr. Hyam was awarded the prestigious Arris & Gale Lectureship from the Royal College of Surgeons of England. The lectureship was established in the year 1646 and is still awarded in stiff competition to surgeons at the height of their career. Previous recipients include Nobel Laureate Sir Alexander Fleming.

Mr. Hyam’s neurosurgery research has been published in prestigious international journals including The Lancet, Nature Reviews Neurology, and The Lancet Neurology.

Royal College of Surgeons of England

Mr. Hyam has received numerous National and International Awards including:

Mr. Hyam's research has been published in the major international journals including The Lancet, Nature Reviews Neurology, The Lancet Neurology and JAMA Neurology.