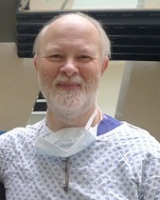 Since his appointment as a consultant in 1997, Mr Wilkinson has been the principal knee surgeon at King's College Hospital.

Having graduated from the Westminster Medical School in 1982 Mr Wilkinson undertook house officer posts at Brighton General Hospital and at the Westminster Hospital. After A & E SHO posts at QMH, Roehampton he sat Primary FRCS. His basic surgical training followed at Basingstoke and Winchester, during which he passed FRCS. After a number of Orthopaedic Registrar locum posts he did eight months of Burns and Plastic Surgery at QMH Roehampton.

Mr Wilkinson spent four years on the St Mary's registrar rotation, rotating through Cuckfield, St Mary's, Charing Cross and Westminster Hospitals. This gave him a broad base in Trauma (1:2 for two years and 1:3 for two years) and elective orthopaedics, including knee surgery.

He was then appointed to the Charing Cross Senior Registrar Rotation, rotating through Kingston, Northwick Park and St.Mary's Hospitals. He passed the FRCS (Orth) whilst at Northwick Park.

The southern hemisphere then beckoned and he spent 1995 with his wife and children in Sydney. He was the Senior Registrar/Fellow at the Royal North Shore Hospital where he did a Knee Surgery/Trauma Fellowship. On my return to London he was a Senior Registrar at the Chelsea and Westminster Hospital for six months, and then a locum consultant for a further six months.

In January 1997 Mr Wilkinson was appointed as a locum consultant at KCH, and was appointed to the substantive post within the month. Since then he set up and ran the knee unit and tried to provide a supportive service to his GP and hospital colleagues for the benefit of our patients. This has included reducing in-patient stay, the production of an exercise video/DVD for joint replacement patients, helping to set up a sports injury clinic, setting up a joint replacement follow-up clinic (where all patients are 'scored') with a senior physiotherapist etc.

Since his appointment he ran the undergraduate teaching in orthopaedics at KCH and was appointed as an Honorary Senior Lecturer for this role. He was also on the undergraduate curriculum committee when Guy's, King's and St Thomas's Medical Schools merged and he has examined at the year 4 final examinations since the merger.

Mr Wilkinson has also run courses for GP's and physiotherapists through his 'Jointcare Orthopaedic Meetings' practice and has also visited a number of GP and Physiotherapy practices for CPD meetings both to enable him to meet GP and Physio colleagues as well as help keep primary care colleagues abreast of current practice in knee surgery (and NHS/PCT politics and practices).

His elective orthopaedic practice is mainly knee surgery. This includes the assessment and treatment, both non-surgical and surgical, of soft tissue and sporting injuries, anterior knee pain, meniscal and ligament injuries, degenerative and arthritic conditions, and fractures. He has performed over 4500 arthroscopies (‘keyhole surgery’ operations), including meniscal trimming and repair, and over 750 primary and revision ligament reconstructions. He has also performed over 1700 joint replacements: unicondylar and patello-femoral as well as primary and revision (re-do) total joint replacements.

He retired from the NHS on 31.12.2018 in order to concentrate on his private and medico-legal practice.