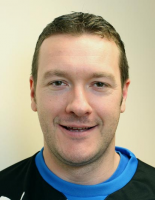 Paul graduated from Medicine at Newcastle University in 1999, becoming a full time Emergency Medicine Consultant in 2008. He received his Diploma in Sports and Exercise Medicine from Bath University in 2007 and began working full time in elite sport in 2009. Paul has previously worked for the Football Association as team doctor for England Futsal, England U17, England U16 and at the World University Games with the Great Britain University Football Team in 2005. He worked at the 2002 Commonwealth Games in Manchester and has been a medical officer at the Great North Run. He is currently the Sports and Exercise Medicine Training Programme Director for the Northern Deanery. In his spare time he likes to spend time with his wife and 2 boys, and even manages to take part in the occasional triathlon!