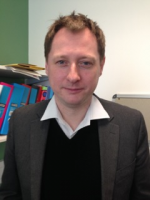 Trained in oncology in the Yorkshire Cancer Network, he has also completed a 2-year research fellowship at the Princess Margaret Hospital, in Toronto before starting as a consultant in Leeds.
He was appointed as consultant in 2009 and as an Honorary Clinical Associate Professor at the University of Leeds in 2015.
Dr Franks is currently the Clinical Lead for lung SJIO Stereotactic Ablative Radiotherapy (SABR) and Lung Oncology at the Leeds Cancer Centre
Dr Franks’ research interests are in technical radiotherapy including 4DCT, image guided radiotherapy (IGRT), intensity + volume modulated radiotherapy (IMRT/VMAT) and radiotherapy informatics. In the UK, Dr Franks is an executive member of the UK SABR Consortium executive He is a member of the national Clinical and Translational Radiotherapy Research Group (work stream 4) and was the co-chair of the National Cancer Action Team (NCAT) Image-guided Radiotherapy working group. He was the oncology advisor on the British Thoracic Society Pulmonary Nodule Guidelines and is now co-chairing the RCR/IPEM/SOR guideline group for Image-Guided Radiotherapy in the UK.