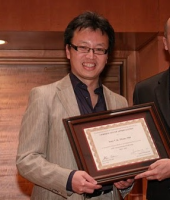 Dr Tham qualified from the Queen’s University of Belfast’s medical school. He trained as a gastroenterologist and physician in the Northern Ireland training program. He completed his training as an Advanced Gastroenterology Fellow in the Brigham and Women’s Hospital, Harvard Medical School, Boston, MA, USA 1995 - 6.

He is the President of the Irish Society of Gastroenterology. He is on the Governing Board of the European Society of Gastrointestinal Endoscopy. He was the Head of the School of Medicine, Northern Ireland Medical and Dental Training Agency (deanery) for 6 years and is now Training Program Director for General Internal Medicine. He is the Vice Chair of the Specialist Advisory Committee for internal medicine at the Joint Royal Colleges of Physicians Training Board. He was the Chair of the British Society of Gastroenterology committee on clinical services and standard. He was the Guidelines Editor for the gastroenterology journal Gut. He is an examiner for the Royal College of Physicians of Edinburgh and also Queen’s University.

He has more than 67 publications in peer reviewed journals. He is the first author of a book entitled “Gastrointestinal Emergencies" which has been published as a 2nd edition and translated into Polish. The 3rd edition is in press.

Details of entry to specialist register

Following treatment of a Bupa member, I will communicate with GPs in line with Department of Health, GMC and appropriate professional bodies guidelines.

Thank you for your feedback

The information contained on Finder is submitted by consultants, therapists and healthcare services, and is declared by these third parties to be correct and compliant with the standards and codes of conduct specified by their relevant regulatory body. Bupa cannot guarantee the accuracy of all of the information provided.